Pound Ridge Garden Club
Federated Garden Clubs of New York State
Club Recognition Award 2017
At their September meeting, the Federated Garden Clubs of New York State presented the Club Recognition Award to the Pound Ridge Garden Club for its outstanding overall achievement. Several factors were considered in deciding if the club qualified for the award, including community and environmental involvement and how strongly the club's projects supported national and state garden club goals and objectives. Among other things, the club was noted for
More information about PRGC's various projects can be found in the Photos/Events section of this web site. 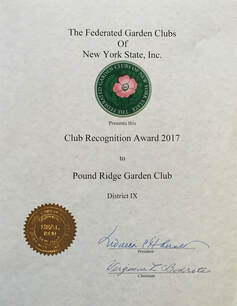